One month ago, with Berlin and many other major cities around the world reeling from the onset of the COVID-19 pandemic, we at Impact Hub Berlin and six other partners launched the #WirvsVirus Hackathon.

The 48-hour sprint to develop COVID-19-related innovations caught the imagination of tens of thousands of eager participants across the Germany. A week later, we announced the jury’s top 20 projects, alongside four avenues of further support open to those who took part.

These include two accelerator programmes: the Solution Builder and Solution Enabler, as well as a Matching Fonds crowdfunding campaign. This post focuses on the Community Management aspect and what we’ve learned so far.

We’ve been in the business of ‘managing’ a dynamic community of changemakers since 2014. Yet a fully virtual, 27,000-strong one brings a change in scale and the need for a new perspective.

Ah, I see. Well, there's a lot going on right now & we don't have the capacity to make changes to fundamental systems like that. I thought you meant there were already 40,000 people in the Slack instance. Adding 40,000 all at once to a single instance seems like … a bad idea 🙂

After the initial burst of activity during the Hackathon weekend, not letting the energy and enthusiasm for building creative solutions to alleviate the COVID-19 crisis fade became the next big hurdle. How could we most effectively support this newly-forming community?

We opted for continuing to host a Slack workspace to allow the hackers to communicate and access resources and contacts. The aim was to transition it from a one-off ‘wild weekend’ to a nationwide forum for all those coming together against COVID-19. The Community Management team employs a light touch approach, aiming not to over-engineer and to be clear on what it is (and isn’t) there to do.

A key enabler has been democratising and decentralising the knowledge and resources built up over the early days and weeks of #WirVsVirus.

For example, setting up ‘Know How’ Slack channels for questions about specific topics (such as project management, design or tech) reduces the need for direct engagement from moderators and empowers the community to support itself. 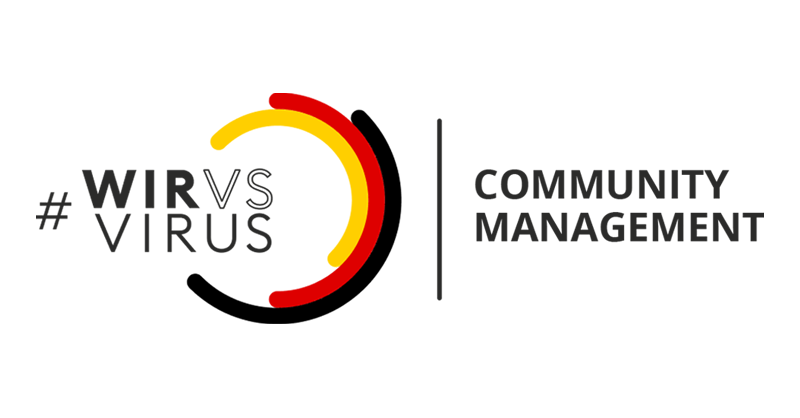 Around 5,000 hackers each week still access the workspace, made up of almost 300 channels. Others who prefer different tools have moved their communication there and many chose to receive our weekly summaries directly to their email inboxes.

Magnets in the Haystack

Alongside light touches from our team and tapping the hive mind of the hackers themselves, individual tools act as another time-saving ‘bridge’ between the community and its managers.

It quickly became clear that finding an individual with the ideal skillset to meet a team’s need was like finding a needle in a haystack. A participant decided to set up a Google Form to build up a database of offers and needs – a much more efficient means than searching through the workspaces’s half a million messages. ‘Magnets’ like this make finding the right needle much faster.

Often, the Community Managers themselves become the magnets. Among so much information, repeating, repeating and repeating the most important parts is sometimes the most realistic hack.

To date, it’s been a privilege to host such an open and inspiring group of passionate individuals, many of whom we’ve also learned a lot from over the past month.

We look forward to sharing more insights from the awesome #WirVsVirus community soon. Be the first in line for the next instalment by signing up to our monthly newsletter and following us on Twitter.