Berlin’s identity is based not on stability, but on change.

This is a point made by Alexandra Richie in her book, Faust’s Metropolis: a History of Berlin. In the book, Richie describes the many physical and imaginary changes that the German capital has undergone in recent centuries.

For all of us involved in Berlin’s community of changemakers, it is certainly an appropriate definition. What can a city like this teach us about the past, present, and future of social transformation? We asked social entrepreneurs, artists and members of our community about the place that for them represents the essence of the Berlin and the concept of change.

The questions were asked in the early months of 2020 – a world that now seems distant – back when we could go out on the streets and enjoy anywhere we wanted. In these times of increased isolation, it seems more important than ever to exercise our imagination, to remember how things were and can be again.

Perttu Ratilainen is co-founder of Radbahn Berlin, a project that aims to transform “the forgotten space along Berlin’s famous U1 elevated subway line into a major urban thoroughfare and create a space for contemporary mobility, innovation, and leisure.”

When I ask about one place in the city, he laughs, turns the rotating chair in which he is sitting and, still smiling, responds: “Tempelhof. Berlin still has so much space. It is not such a densely populated city and Tempelhof reminds us of the existence of these spaces.”

The Tempelhof building was once of the largest on the planet, and its open space is now one of the biggest parks in the city.

On Radbahn’s website, we see seven of the founders of the project throwing paper airplanes with the former airport as a background. The Tempelhof building was once of the largest on the planet, and its open space is now one of the biggest parks in the city.

In addition to the abundance of space, Tempelhof is a symbol of the complexity of layers that the city has acquired. A place that has been a Turkish graveyard, a concentration camp, the location of the first ascent of an aluminium balloon, and – more recently – a shelter for refugees. A park with next-to-no trees and an airstrip, it occupies a unique place in Berlin’s collective consciousness. 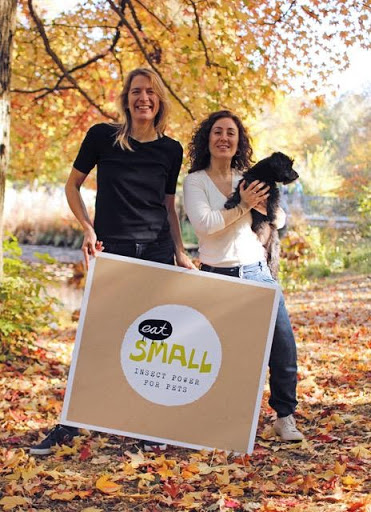 Gema Aparicio is a graphic designer and co-founder of Eat Small, whose mission is to reinforce animal health while supporting planet Earth. Their food and treats for dogs have no trace of any fish, poultry or mammal. Instead, they offer a source of nutritive, ecological protein that surpasses any meat on sustainability and ethical aspects: insect protein.

Gema chose Tacheles as her location in the city. The place was an art centre and housed an artist’s collective for two decades, occupying the large building and sculpture park on Oranienburger Straße.

The place was a symbol of freedom and creativity.

The building was originally a department store in the Jewish quarter, later serving as a Nazi prison and finally, after the fall of the wall, it was taken over by artists, who called it Tacheles, after the Yiddish word meaning “straight-talk”. The place was a symbol of freedom and creativity, says Gema. The building is currently being renovated and under a real estate development plan, just the latest change in a long line of them.

When I ask Gunter Demnig for a place in the city, he is at first silent and then says: “it doesn’t exist. Berlin does not have an essence; there are very different districts, with very diverse histories only recently united.” 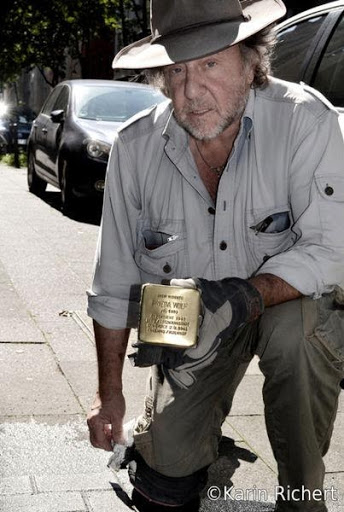 Demnig, born in Berlin in 1947, is an artist who has installed more than 70,000 Stolpersteine in 25 countries to commemorate people persecuted or murdered by the Nazi regime. He concluded: “I’m sorry, but I can’t give you an answer.”

I smile while listening to him, allowing the silence to change once again the image the city had just begun to form.

About the author: Tomas Rosenfeld holds a bachelor’s degree in International Relations and a masters in International Economics. He has more than ten years of experience working within the social innovation field, especially in Brazil, where he was born. Tomas is also a writer and has published two novels, the first of which was a finalist for the São Paulo Literature Prize. He is currently a fellow of the German Chancellor Fellowship program for tomorrow’s leaders of the Alexander von Humboldt Foundation.

Together with Impact Hub Berlin, Tomas is researching social entrepreneurs who are transforming the current reality of the city.